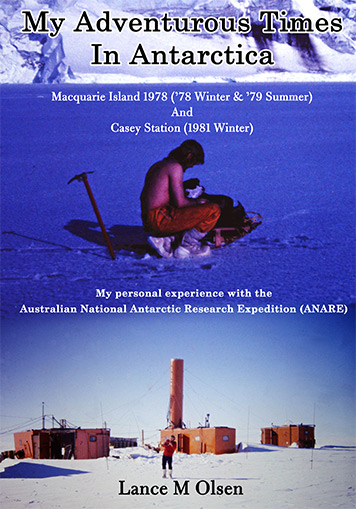 My Adventurous Times in Antarctica

My personal experience of wintering in Antarctica, with the Australian National Antarctic Research Expedition. Scientific Research Stations at Macquarie Island (1978) and Casey Station Antarctica (1981). This book consists of many pictures and stories of the expeditioners life and duties in these isolated, harsh environments.

Leaving Macquarie Island and the 1979 expeditioners was a mixed bag of emotions. I witnessed the grieving of some of the expeditioners from the loss one of their mates, a biologist. I felt for them and wondered what wintering on the Island was going to be like for them. I was pleased to finally go home aboard the Danish ice breaker, Thala Dan. 15 Months was a long time away from home on an isolated Australian Scientific Research Station. I boarded the ship after she serviced the other Australian Stations in Antarctica.

Seeing Australia for the first time in 15 months was going to be an unknown, as I had changed and wondered where life takes me now. Approaching the Australian mainland, I could smell the burnt summer air which I no longer take for granted.

In 1980, I reapplied to go south again to Antarctica with 1981 Expedition, this time to Casey, Another story unfolds and is told in this book, along with the Macquarie Island story.